The opening scene of the movie, “Hellzapoppin,” features an affluently dressed chorus line walking down a flight of stairs, when suddenly, the floor falls out from under them. The musical, later made into the movie during the great depression, visualizes people plummeting through space becoming prisoners of a vaudeville hell. By using slap stick antics and absurd logic, the movie critiques a world gone mad during crisis. 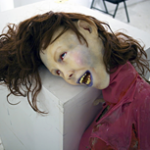 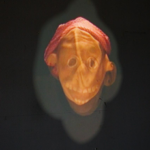 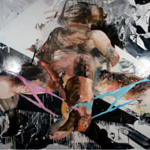 George Jenne, Erika Keck, and Christy Singleton have all tapped into this same psychological angst of an uncertain future and an insane recent past with their paintings, sculptures, and mixed media. Collectively these artists grapple with their individual demons and bring about a beautifully grotesque and absurd vision of consumerism, self-awareness, and sexuality in the early 21st Century.

Cinematic fakery characterizes George Jenne’s sculptures, which chronicle his long obsession with childhood monsters. He takes a “smoke and mirrors” approach by using reflective materials, theatrical lighting, and mysterious projections in contemplation of the meaning of the word, monster. Simultaneously, Christy Singleton presents her ‘Jiffy Pop people’ sculptures; their twisting bodies covered with a domesticated armor of aluminum foil or melted plastic shopping bags. The people are bloodied survivors of domestic social warfare. And finally, Erika Keck unveils her explosive angst-ridden paintings, with writhing flashes of paint and flesh. They are collisions of chaotic glamour and gender, where absolute physical form and certainty is unattainable, in her personal battle of the sexes.